Our Work
Home > Policy & Advocacy > The Value and Benefit of Public Universities > How do college graduates benefit society at large?

How do college graduates benefit society at large?

Nearly 70 percent of bachelor’s degree holders earn their diplomas from public universities and public university graduates play a central role in enhancing their communities.1 Although the public often emphasizes the benefits of a college degree to graduates themselves, the benefits to society are just as important. Through volunteer work, leadership, and philanthropic contributions, public university graduates enrich the civic and economic life of their communities. They also contribute more in taxes and are less reliant on government services than their peers whose highest degree is a high school diploma. 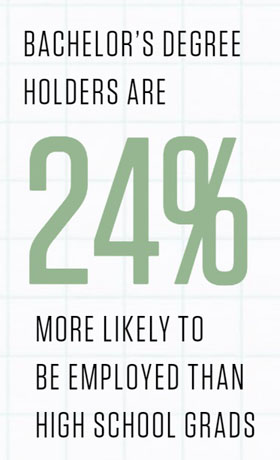 By nearly any measure, college graduates outperform their peers who have only completed their high school degree. For example, the average graduate is 24 percent more likely to be employed and average earnings among graduates are $32,000 higher annually and $1.2 million higher over a lifetime.2 Moreover, those with college degrees are more than twice as likely to volunteer and they contribute nearly 3.5 times more money to charity.3 And 75 percent of bachelor’s degree completers vote in presidential election years, compared with about 52 percent of high school graduates.4

What’s more, college graduates are considerably less reliant on government programs and services than those with a high school degree. These government programs include Medicaid, housing subsidies, nutrition assistance, unemployment benefits, and other public assistance. For instance, those who graduated college are 3.5 times less likely to impoverished and nearly five times less likely to be imprisoned. In all, lifetime government expenditures are $82,000 lower for college graduates than for those with high school degrees.3 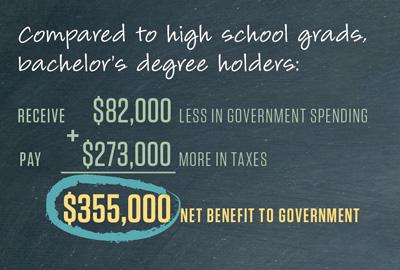 Governments also rely on college graduates for a disproportionate share of their tax revenues. Because college graduates typically earn more and higher earnings are taxed at an increased marginal rate, they contribute over $510,000 in taxes during their lifetime—$273,000 more than a high school graduate.3

Those with advanced degrees contribute even more—another $167,000 on top of the $355,000 for those whose highest degree is a bachelor’s degree.3

On average, state and local governments contribute $7,000 per full-time bachelor’s degree-seeking student—or about $28,000 for a student who earns a degree in four years.5 In other words, the $28,000 in state and local investment results in $355,000 reduced government spending and increased tax revenues across all levels of government.

2022 Data Literacy Institute Convening
The Data Literacy Institute – a partnership between APLU and the Association for Institutional Research with funding from Ascendium – brings together cross-departmental teams from 11 Powered by Publics institutions from Cluster 14 to engage in training that enhance their use of data to improve equitable student outcomes. In May 2022, Powered by Publics held […]
View All Projects & Initiatives